After catching a viral cold at one of the Gyms in Mysore I looked for trails instead of Treadmills. Once I got used to the nature trails, I do not step on a tread mill.

I never miss my morning out in nature, ever. Even on those days when I have committed to play more than 3 sets of tennis doubles with my tennis partners, I walk at least a mile in nature before my Tennis.

It is six in the morning in my hometown of Mysore and the first ten minutes of my walk from my car to Kukkarhally lake need my Smartphone’s powerful LED light to see the path ahead. Five minutes into the walk, I switch off my Smartphone flashlight as daylight slowly starts to beak in. I get my first view of the lake on my right. Even in the early morning half-light, the lake shines and simmers, annulling the smell of the rotten moss from my left. Like life, nothing is perfect on the one side while everything is perfect on the other.

I increase my pace, and I see the silhouette of a man coming from the opposite direction with a torch in his hand, and I wonder if he is returning or has started his walk from the opposite entrance. As he gets closer, he turns out to be the caretaker of the lake.

The rays of the sun come screaming through a bush. It is as if they are trying to seduce me. 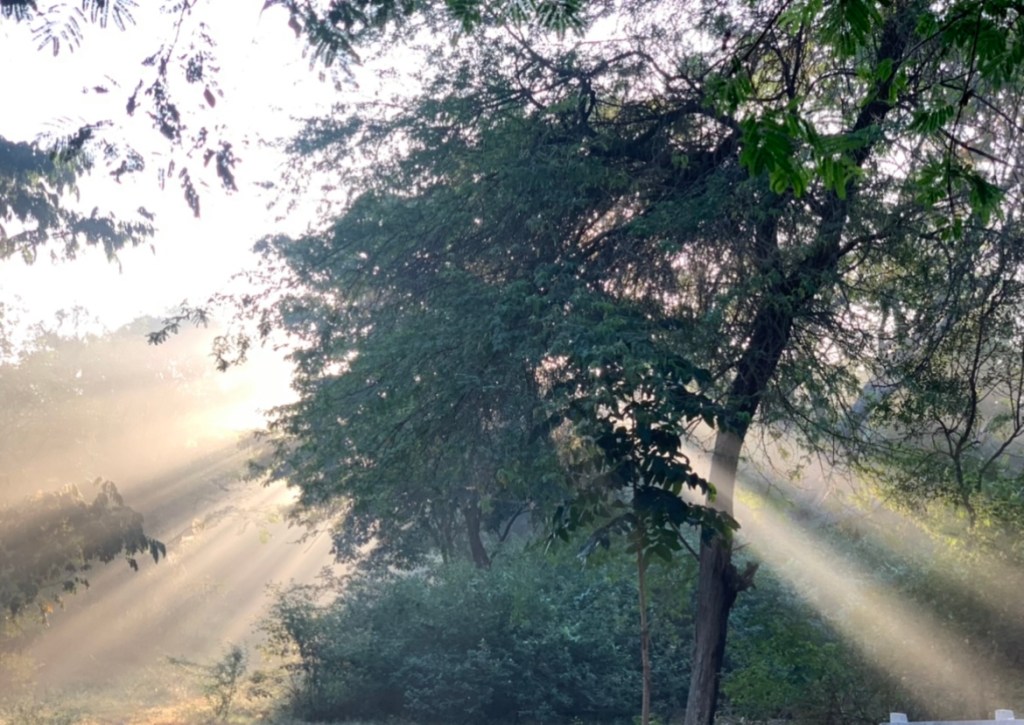 I finish my first 500 meters, the surroundings get brighter, and I arrive at the lake’s northeast corner. Then, the pathway takes a right turn. I recall when I saw a couple of Jackals cross the small trail in the woods across.

A girl with her hair tied up wearing earphones goes jogging overtaking me. I try not to look at her from behind, but my evolutionary impulses overtake my better sense, and I look momentarily but bow down and look at the fallen brown dry teak wood leaves and a myriad of twigs on the ground. Then, a peacock cries, piercing the silence. For a creature as beautiful as the Peacock, it has one of the most cacophonic calls.

Another ten minutes of my brisk walk, and the path ahead inclines upwards steeply and signals the arrival of the midpoint of the walkway around the trapezoidal lake. The moment of realization that I am not a part of nature arrives as I merge with the myriad of people that entered the lake premises from the eastern entrance. A few people have covered their mouths and noses with their handkerchiefs tied around their faces, not as much against corona as against flies and mosquitoes that often get into your nose and mouth. Then, out of habit, I observe their walking. Walking style is of the most unique and fascinating traits about people, as unique as their signatures and fingerprints, and it says a lot. I see the fair older man with an army mustache and holding a stick from opposite directions. His head is bent all the way to the right, and he usually walks, giving loud discourses on politics with a couple of his admirers.

As I call him, the man with the loudest swagger tries to overtake me. He walks fast with a gait that is springy and energetic. His chest is forward, his shoulders are back, and his head is way up. He walks, throwing his arms and legs so vast that the people around him feel intimidated.

In total contrast, there is this retired Government official who walks without moving either of his arms by an inch. As he walks, his arms are held close to his sides to avoid intruding on other people’s space.

I see the bespectacled middle-aged man who is another regular coming from the opposite direction. He throws his head up and down with every step, much like a cow does while walking. He uses his head to keep his body steady while walking. My friends tell me I walk fast and focus as I have somewhere to be quick.

A flock of pigeons suddenly take off from the watchtower. They startle me with the sudden noise of their fluttering.

I turn my head and look at the view of the lake, now to my right.

I turn my head to see “Born fighter” on a T-shirt, but the young man wearing it is ambling rather than walking. I get the odor of inadequately dried clothes as he passes me by, and I check my armpits Ito make sure it is from me.

And then the noise of clapping. A man in his mid-forties stands alone in the clearing near the giant oak tree and claps, spreading his arms wide apart and bringing them together.

I come to the end of my walk and feel lighter just looking at my wet T-shirt. Then, I look at my performance. 4.20 Kilometers in 32 minutes.

The thing with nature walk is that every time I do it, I always get richer than when I set out.

“The clearest way to the universe is through the wilderness of nature,” said a wise man once. I agree. Every time I hike in nature, I get richer than when I set out. Richer in terms of inner peace and self-knowledge. The same trail, the same trees, the same birds, the same lake, yet with so many different nuances every time.

I get into my car and joyously set out for my Tennis.

The day I became a father

After being threatened by a Bangalore mob boss, retired Indian businessman Mohan Ranga Rao takes a vow to trek around Mount Kailash, a holy Tibetan Mountain revered by over a billion people. What starts out as merely a challenging high-altitude trek soon becomes a life-changing adventure. With a blend of humour, honesty and keen insight, Mohan journeys toward a deeper understanding of the world around him. A memoir of a road less travelled and a true story of self-discovery at 19,000 feet.